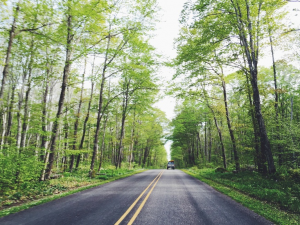 Motorcycling or driving the amazing 140 mile Five Rivers Rumble offers a beautiful mix of hills and curves, nature and history! The route takes about half a day, counting a meal stop, or a full day if you stop at some of the points of interest along the way.

The Rumble begins in Pocahontas, Arkansas, population about 7,000 and home to Lesmeister Guesthouse and other lodging opportunities, restaurants, and historic sites of interest, such as the site of the capture of Civil War general Jeff Thompson. Proceeding north through the German immigrant community of Engelberg, the route winds through the Ozark hills through the town of Maynard and the original route of the Trail of Tears, then north into Missouri and the quaint town of Doniphan.

After circling through Doniphan the route enters the Mark Twain National Forest before passing the wonderful Crumpie’s Barbecue, an oasis for rest and good food near the town of Myrtle.

Turning south back into Arkansas, just outside the community of Dalton the route passes the fully restored Rice House, an 1828 log cabin that’s the oldest dwelling in Arkansas, before traveling to Ravenden Springs, home to the beautiful Hall’s Creek Canyon.

Before returning to Pocahontas the Rumble passes Davidsonville Historic State Park, location of the first courthouse in the whole state of Arkansas.

The route presents numerous places to eat and places to buy gasoline.

Points of Interest Along the Five Rivers Rumble